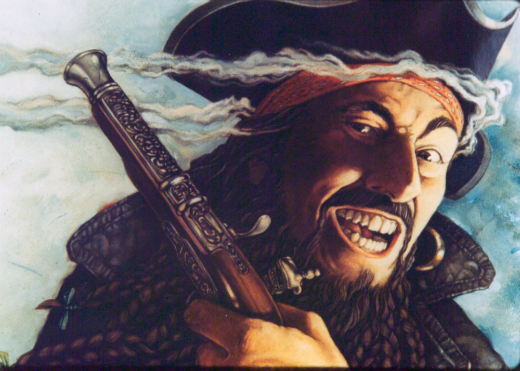 Blackbeard was the most feared pirate of all.

Blackbeard was known as the most terrifying pirate in the world. Before capturing a ship, he would weave hemp into his beard and light it. This made him look very scary.

The skull and crossbones flag at the top of a pirate ship is called a Jolly Roger.

There were women pirates, too.

Grog was the pirate’s drink.

Grog—a mixture of rum, water, lemon juice, and sugar—was the drink of choice for pirates.

Pirates did have eye patches.

It’s been said that one of the reasons pirates wore eye patches was to help keep one eye adjusted to night vision for seeing below deck.

Pirate’s treasure didn’t always include gold or silver; most of it was food, cloth, and animal hides.

Each pirate ship had its own set of rules and code.

Almost every pirate ship had their own set of guidelines that all pirates had to agree to. This included how the loot would be divided, who had what chores, and what was expected of everyone. Believe it or not, one of the most common rules was no fighting onboard.

Write some facts about what you have learned about Pirates.

I'm looking forward to reading what you have found out, so please remember to send me a picture of your work.

Unfortunately not the ones with chocolate chips.

Some cookies are necessary in order to make this website function correctly. These are set by default and whilst you can block or delete them by changing your browser settings, some functionality such as being able to log in to the website will not work if you do this. The necessary cookies set on this website are as follows:

Cookies that are not necessary to make the website work, but which enable additional functionality, can also be set. By default these cookies are disabled, but you can choose to enable them below: