At Kirkby Stephen Primary School we aim to encourage and improve the children’s use of language in a range of contexts so they can develop fluency and understanding in reading and learn to express their thoughts and feelings clearly and confidently both orally and in their writing.

Our curriculum recognises the central importance of reading to children’s learning. We want the children to become confident, independent readers with a love of books and the ability to access the whole curriculum through reading, understanding and responding to all types of texts.

How we teach phonics at Kirkby Stephen Primary School

So, what exactly is phonics?

Words are made up from small units of sound called phonemes. Phonics teaches children to be able to listen carefully and identify the phonemes that make up each word. This helps children to learn to read words and to spell words. In phonics lessons children are taught three main things:

Phonemes: Each letter in the alphabet has a ‘name’ (a = ay, b = bee, c = see, etc), but spoken English uses about 44 sounds (phonemes). These phonemes are represented by letters (graphemes). In other words, a sound can be represented by a letter (e.g.‘s’ or ‘h’) or a group of letters (e.g. ‘th’ or ‘ear’).These sounds are taught in a particular order. The first sounds to be taught are s, a, t, p.

Blending: Children are taught to be able to blend. This is when children say the sounds that make up a word and are able to merge the sounds together until they can hear what the word is. This skill is vital in learning to read.

Segmenting: Children are also taught to segment. This is the opposite of blending. Children are able to say a word and then break it up into the phonemes that make it up. This skill is vital in being able to spell words.

In some languages learning phonics is easy because each phoneme has just one grapheme to represent it. The English language is a bit more complicated than this. Obviously we only have 26 letters in the alphabet so some graphemes are made up from more than one letter, such as ch th oo ay. These are all digraphs (graphemes with two letters), but there are other graphemes that are trigraphs (made up of 3 letters, e.g. igh) and even a few made from 4 letters (e.g. ough). Another slightly sticky problem is that some graphemes can represent more than one phoneme. For example ch makes very different sounds in these three words: chip, school. 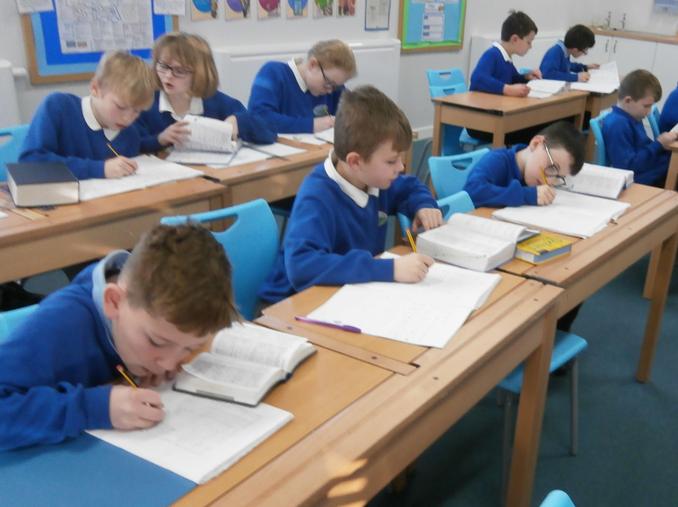 Our ‘Purpose for Writing’ approach focuses on four key types of text, each with a distinct purpose: writing to entertain, writing to inform, writing to persuade, and writing to discuss. This approach helps children to select appropriate vocabulary, sentence structure and text form for good effect and to apply their spelling, punctuation and grammar skills creatively in a variety of contexts. 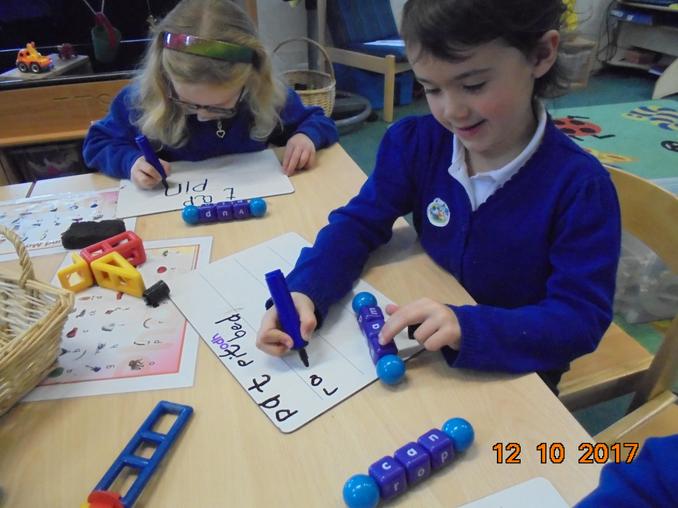 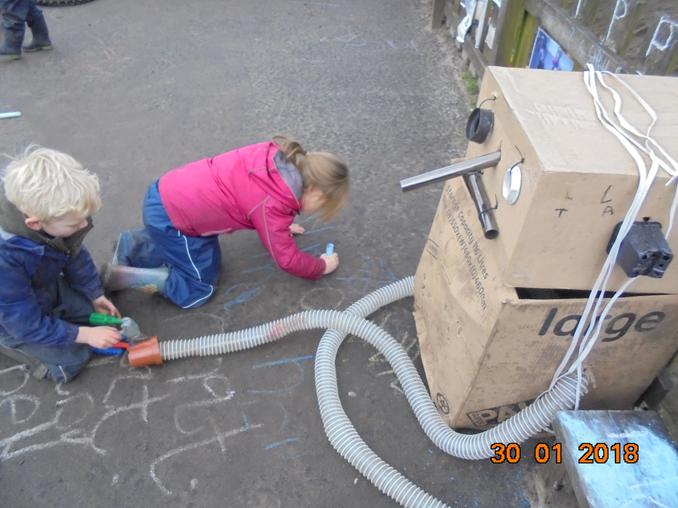 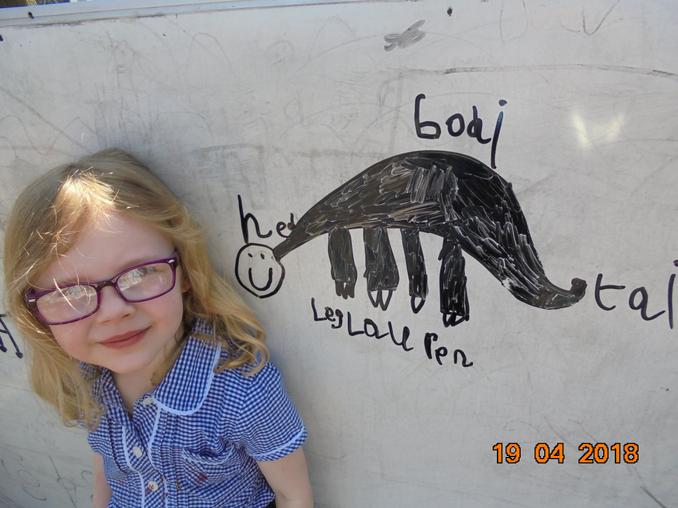 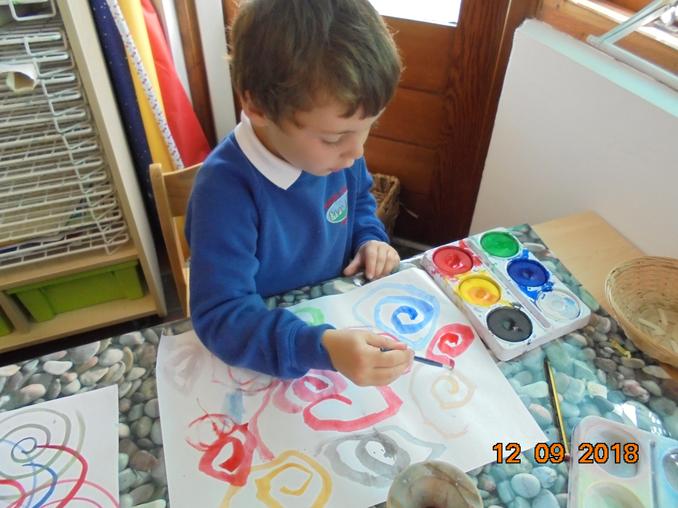 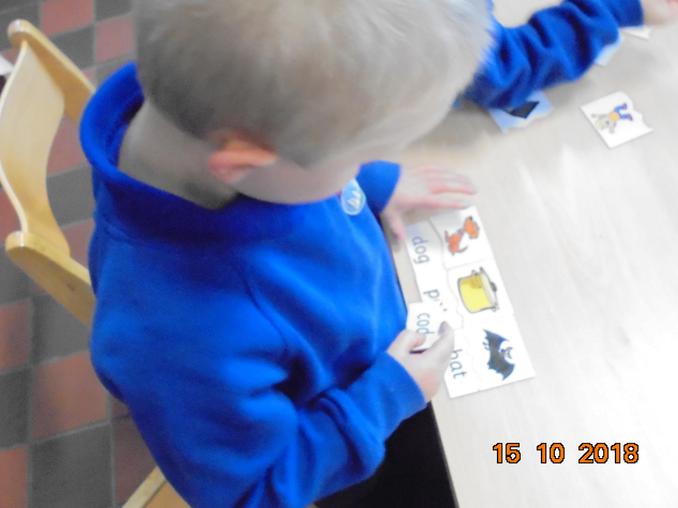 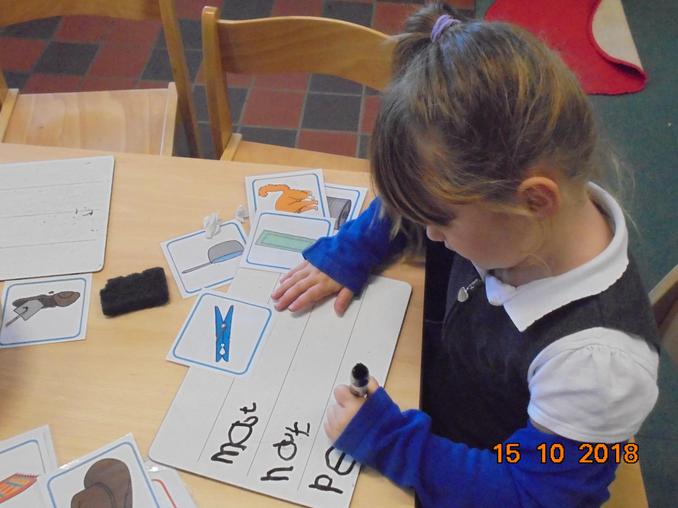 Maths will be essential in almost every problem that your child has to solve in their daily lives. We aim to ensure that your child will develop a positive attitude towards mathematics and to learn to use it with confidence, pleasure and understanding. Their knowledge, skills and understanding in maths will develop as they use it in practical activities to solve relevant meaningful problems and to explore the patterns and relationships on which mathematical concepts depend.

In the EYFS, your child is likely to cover the following areas;

Counting up to 20 everyday objects

Saying and using the number names in order

Finding one more or less than a number up to 20

Starting to use the language of addition and subtraction; counting on and back

Sorting and matching objects and shapes

Beginning to do some simple measuring, comparing lengths and quantities

Finding one more or less than any number

Recognising, finding, naming and writing simple fractions of a length, shape, set of objects or quantity

Measure and record the length, height, weight or volume of different objects

Tell the time to the hour and half past the hour, drawing the hands on a clock face to show these times

Ordering and arranging objects in patterns and sequences

Recognise and name common 2D and 3D shapes including squares, circles and pyramids

Counting in steps of 2, 3 and 5 from 0, and in tens from any number, forward and backward

Recalling and using addition and subtraction facts up to 20, and deriving related facts up to 100

Telling and writing the time to the nearest five minutes

Using and understanding numbers up to 1000 and then beyond 1000

Remembering times tables up to 12 x 12

Telling the time accurately, including using Roman numerals, and calculating with time

Calculating with measurements, including calculating perimeter and area

Your child is now at the top end of the primary school and the focus is on preparing them for the demands of the secondary school curriculum. At this age, here are some things your child is likely to be doing:

Reading, writing, ordering and comparing numbers up to 10,000,000 and determining the value of each digit

Rounding whole numbers and beginning to use negative numbers

Multiplying and dividing numbers with up to 4 digits by two-digit whole numbers, using long multiplication and division

Using the order of operations and solving multi-step problems

Calculating with fractions and associating fractions with decimals and percentages

Converting between units of measure and calculating with measurements, including time, area and volume

Calculating and interpreting the mean as an average

There are a variety of different calculation methods used in schools today. You may hear terms such as partitioning and place value. See the Jargon buster for further explanation of these terms and methods. Whatever method your child is taught at school, lots of practice at home using numbers and times tables in fun activities will be a great help. Our Fun activities section is full of maths games you can play together.

Children continue to be assessed informally throughout the junior years and this helps to inform the teachers’ planning so that they can support each child in the class.

In the last year of the primary school, children usually sit the standardised assessment task (SATs) or end of primary school test in mathematics; reading; grammar, punctuation and spelling in order to check their progress in preparation for secondary school.

There will also be teacher assessments of maths, reading, writing and science.

There will be open evenings or parent-teacher consultation meetings where you will have the opportunity to talk to your child’s teacher about their progress, but don’t wait for this if you have urgent concerns about your child's education.

If your child is finding maths tricky then extra support is usually provided by the teacher or specialist teacher, in consultation with you. This is often through small group work and may be in or out of the classroom. Your support and encouragement is hugely important but as ever, if you’re worried then do talk to your child’s teacher.

Suggested Maths websites for you to try at home

In the EYFS, science is included within the Understanding the World area of learning. As with other learning in Reception, your child will mainly learn about science through games and play – which objects float and sink during water play, for example. Activities such as these will help your child to develop important skills such as observation, prediction and critical thinking.

The content of science teaching and learning is set out in the 2014 National Curriculum for primary schools in England. Within this, certain topics and areas are repeated across year groups, meaning that children may revisit a particular topic in each year of primary school but with increasing difficulty and with a different focus each time.

For example, the area of animals, including humans is examined in every single year group, with a very clear progression of knowledge and understanding over the six years:

In Year 1 this involves: looking at the human body, recognising animal groups and sorting these animals.

By Year 6, this will have developed into knowing the internal structure of the human body in relation to circulation, classifying living things based on more complex characteristics and exploring scientific research into this classification.

The more detailed content for each year group is as follows:

Plants (what plants need to grow)

Animals including humans (needs for survival, food and hygiene)

Use of everyday materials (explore and compare materials for uses)

States of matter (changes of state, evaporation and condensation)

Animals including humans (human development from birth to old age)

Earth and Space (Earth, Sun and Moon, the solar system).

Living things and their habitat (classification, characteristics of plant and animal groups)

Light (how it travels, how we see, shadows)

Evolution and inheritance (how living things have changed over time, fossils, dinosaurs, adaptation to environment).

Alongside these areas runs the Working Scientifically element. This focuses on the skills the children need to become accurate, careful and confident practical scientists. Children are expected to master certain skills in each year group and there is a very clear progression of these set out for each school to refer to. For example:

In Year 1 a child may have to ask questions, carry out a simple test, record simple data and then try to answer questions.

By Year 6, they should be able to plan and carry out a fair test by using equipment accurately and taking exact readings or measurements. They are also expected to be able to draw conclusions from their results and record them using a range of graphs and charts.

Unfortunately not the ones with chocolate chips.

Some cookies are necessary in order to make this website function correctly. These are set by default and whilst you can block or delete them by changing your browser settings, some functionality such as being able to log in to the website will not work if you do this. The necessary cookies set on this website are as follows:

Cookies that are not necessary to make the website work, but which enable additional functionality, can also be set. By default these cookies are disabled, but you can choose to enable them below: